HISSING, SPITTING AND YEOWLING IN THE BACKYARD! 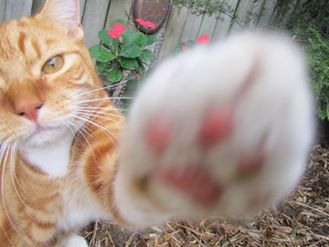 If you’re a cat owner, you’ll know the distinctive sound of yeoowwl… Spit! Spit! Followed by a quick scrummage and your cat either speeding in through the cat flap with eyes wide and ears flat, or a slow, show-off saunter that indicates your kitty won… this round. Often these evening tiffs are followed a few days later by a small lump on her head or rump, that rapidly grows in size resulting in your kitty having a bit of a Quasimodo-look and an unfortunate explosion of pus on the Persian rug – yuk! So, what do you do now? And why and how did this happen?

Why do cats get into fights?

Cats are territorial animals with their own home range. Their territory is the area that they regard as their own space, somewhere that they will defend. A home range includes the area that they habitually use; the area they spend time in on their patrols around the neighbourhood. They won’t necessarily defend their home range and usually will avoid getting into conflicts in these areas. Home ranges often overlap with those of other individuals so large areas are shared. Territories however are spaces that they may very well defend ferociously, much like you would defend your home if you had a home invasion.

Most cats also have a daily routine. You may find your cat likes going for a little stroll first thing in the morning and another just after dinner at 7pm, whereas the neighbour’s cat may like lying in the sun until 10am and a midnight prowl. These two cats would share the same home range but not necessarily come into contact very often because they have different habits. Fights between cats will often occur if one of the individuals does something out of the ordinary e.g. someone left the cat flap open and your cat ran out for a midnight stroll and came nose-to-nose with Socks from next door on the borders of their territories.

Sexually intact animals are also more likely to get into fights. Intact males will compete with each other, by fighting if necessary, in order to get the opportunity to mate with a female in season.

Much of the caterwauling and spitting is a deterrent by which individuals try to stave off having to get into a real fight, however if one feels particularly threatened or aggressive and lashes out, a full on scramble with claws and teeth may ensue.

What happens if my cat gets in a fight?

Most cat bite wounds look fairly innocuous at first – just a small little puncture wound – surely nothing too serious can come from that? Actually, bite wounds are a bit like icebergs – the major damage is below the surface! Canines are dagger-shaped and are the teeth responsible for most of the trauma in fights. As they penetrate the skin and move into the soft tissue below they rip and pull the skin away leaving a much deeper pocket in the subcutaneous tissue in which oral bacteria are seeded and start to multiply. Usually the pocket is below the opening of  the skin wound so any debris stays in the wound instead of draining out. This warm, dark moist pocket is perfect for growing bacteria and within a few days it is filled with trillions of them swimming in a revolting soup of pus – an abscess! Sometimes these abscesses will burst, other times they just grow in size, occasionally so big that the overlying skin is stretched so much that it’s blood supply is disrupted and the skin dies. This results in a much more difficult and prolonged healing of the skin as well as other possible complications like septicaemia and multiple organ failure.

Apart from the immediate injuries associated with a fight, a more stealthy microbe can also be transmitted in a fight – Feline Immunodeficiency Virus (FiV) also known as Feline Aids. Unlike in HiV, FiV is transmitted in saliva through cat fights where the virus passes from the infected cat’s saliva directly into the bitten cat’s bloodstream.

What do I need to do if my cat gets in a fight?

It sounds pretty obvious, but, get your cat to the vet to be checked out. Often if the wounds are cleaned and flushed out properly (not just wiping the surface clean!) and a course of antibiotics started straight away, the wounds will heal up quickly without any complications. If you’re unaware that you cat’s been in a fight and suddenly notice an unusual lump growing, don’t hesitate to bring them in. Sometimes abscesses can be drained and antibiotics started without having to surgically clean them out. More often though, your cat would have to be anaesthetised, the abscess lanced and the wound cleaned, flushed and a drain placed in order to facilitate healthy healing. Antibiotics will also be prescribed with instructions on how often they need to be administered and for how long. This antibiotic therapy is really important – do not forget to dose your pet and make sure you complete the course. Too often owners stop the antibiotics too soon and this leads to a resistant bacterial population against which we have no defence – once again, complete the course!

Other injuries from cat fights may include: nail scratches to your cat’s cornea, torn toe nails, lacerated foot pads and other injuries sustained while trying to escape.

Can cat fights be prevented?

We can take precautions to prevent fights. Keeping your cat exclusively indoors will prevent it from coming into contact with others and hence prevent fights. If you do allow your cat out, having a special run or keeping them indoors at night will also reduce the incidence of conflict. Desexing pets further reduces the incidence of contact with other cats and vaccinating against FiV reduces the chance of your pet contracting this deadly virus.