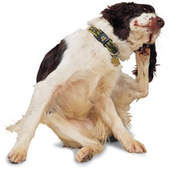 Atopic dermatitis is a very a common cause of itching in dogs and cats, especially in Queensland. In this condition, the animal’s skin reacts to a variety of allergens in the environment, like trees, pollens, grasses or insects.

Most affected animals have a genetic make-up that makes them susceptible to develop the disease, usually between the ages of 1 and 5 years old. Most of the times, the itch follows a seasonal pattern but in a few animals the condition becomes year-round.

Usually, we see skin lesions (redness, hair loss, “pimples”, scratches) in the extremities, muzzle, ventral belly and neck but some animals can have lesions on the whole body. Recurrent ear infections or conjunctivitis (eye inflammation) might also occur in these animals and might be the only sign; as well as persistent feet licking.

The animal’s itch is usually aggravated by secondary infections due to trauma of the skin (from scratching, biting, etc), particularly by bacteria and fungus. The diagnosis of atopy is based on the exclusion of other possible causes of itchy skin in these animals, including flea and food allergy, parasites and bacteria and fungal infections.

Unfortunately this a chronic disease which, if left untreated, can be very debilitating and have a serious impact on the animals’ quality of life. Similarly to human allergies, skin testing can be done in dogs to identify the allergens causing the disease and vaccines can be formulated against those allergens to relieve the symptoms; however the efficacy of the vaccines is variable.

In very rare cases the dog/cat will react to a single allergen in the environment which makes avoidance possible.

Generally, the management of atopy requires a combination of topical (on the skin) and systemic (oral or injections) medications.  Many animals with atopy have a deficient skin barrier so the addition of fatty acids supplements (added to the diet or applied directly on the skin) can greatly improve their condition. Most dogs will also require special shampoos/conditioners that help with soothing the skin or clearing the secondary infections. In a few percentage of dogs (less than 50%) the use of antihistamins can be enough to control mild signs of itching. The most popular anti-itch medications are corticosteroids (e.g prednisone) and cyclosporine.  Recently, these have been replaced by relatively safer and likely-as-efficient drugs, like apoquel (a daily tablet) and cytopoint (a monthly injection).